Athina Krikeli is a documentarian (director & writer) and the CEO of Ellopia Media Group.Through her works was awarded many times. she is known for Mount Olympus: The Creation (2016), New York the Bloody City (2001) and Xtypoun tin porta 13 (2013). She is also a member of the National Academy of Television Arts and Sciences (NATAS), the Society of Motion Picture and Television Engineers (SMPTE) and the United Nations Correspondent Association (UNCA). EMG mission is to promote and expose the Hellenic culture here and in the Diaspora via television programming, documentaries from our travels throughout the world, news articles and various topics of interest.  It aims to address all issues of concern to the Hellenic, Hellenic-American and International communities, and to inform and educate through biographies of artists, musicians, poets and politicians, as well as through coverage of special, educational, religious and cultural events of Hellenes and the International cultural community.  It aims to bring the cultural community “a step ahead and a world beyond”. 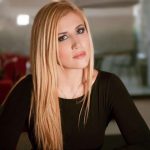